A year later, I’m still not sure how to fully grieve for Jay.  I still feel unsure if I am even entitled to grieve.

Whatever the manner or propriety of my sorrow, I do feel the genuine need to remember him, in all the muddled and complicated ways that render this remembering queer.

Jay Read Katzeman died one year ago, September 5, 2019, while vacationing in New Mexico.  He was 52 and survived by his beloved life partner John Brock.

I received the news with gentle kindness in a Facebook message from his friend Chris, our friend Chris.  Chris had known Jay since high school in Worthington, Ohio, a suburb of Columbus that Jay used to refer to as “Olde Worthington” in his thickest Thurston Howell III or William F. Buckley or George Plimpton patrician voice to mock its wealth and pretension.

In the 21 years since we split up, I have never been able to refer to Jay as my “ex.”  I’ve resisted the implied finality of the term, of a relationship forever ruptured.  He was always too important to me for that.  “Former partner” seems more appropriate, since we remained friends, however much we lost touch.

In the week’s that followed the news of his passing, I experienced a weird, flailing isolation that sent back to my gay teen years when I felt I was alone in the world.

His death left me shocked and numb, but also distressed that the usual avenues for navigating loss were unavailable to me.  Afterall, our relationship ended decades ago and at a time when much of society considered same-sex couples counterfeit.  Were my feelings counterfeit?

I also didn’t want to intrude on John Brock’s mourning.  Nor did I want to express inordinate grief to my husband Rick.

I felt I had to keep my sadness to myself, mitigated and hidden.

In the meantime, I encountered the flood of memories that come when someone dies, snatches I’d forgotten about and would otherwise not be able to conjure.  I found myself jotting words and phrases, each triggers of memory, while flashbacks came forth.  The mind can be a sieve and I wanted to document these memories so I wouldn’t lose them.

Jay and I met on the train, the California Zephyr going from San Francisco to Chicago, both on our way to New York for Stonewall 25.  He came up me in the café car while I was writing in my journal.  When I showed him the Book 41 on the cover he said, “Nuh uh!”  I replied, “Uh huh!”

Jay was a poet, looking ahead to finish his final semester at San Francisco State University in the fall.  He was a sort of hippy-dippy bohemian, chatty, rebellious, outgoing, charmingly fey, and profoundly perceptive.  He was so creative and so fucking funny. 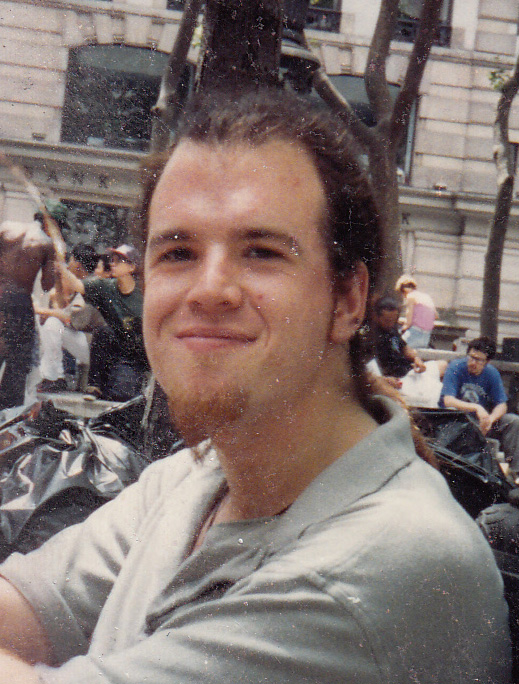 Our summer romance turned into a five-year relationship.

He introduced me to tofu, lots and lots of tofu.

He introduced me to the Tragically Hip, who we saw together twice, once at the Palace of Auburn Hills and once at Pine Knob when it was still called Pine Knob, snagging fourth-row seats for both concerts.

And he got me out of Flint.

While we lived in Ann Arbor, he worked as an administrative assistant in the University of Michigan School of Art and Design and I got my job at the Graduate Library in Interlibrary Loan.  We made a home with our kitties.

In 1998, the UM Museum of Art hosted a small, stunning exhibit “Monet at Vétheuil: The Turning Point,” with twelve of Claude Monet’s paintings.  We got an exclusive tour.  Then, with his friend Alice’s mom Gillian, who had been an art teacher, came up from Toledo and we saw it again.

There’s the New Year’s we spent at a cottage owned by his friend Dana’s dad in the glorious woods of Hocking Hills.  I remember spending hours putting together a jigsaw puzzle only to discover a piece missing.  So, we ceremoniously burned it in the midnight bonfire.  It turned out that a secretary had the piece in her desk drawer back at the office.

Among my most cherished memories of Jay is the delight of him breaking up in hysterical laughter while watching Absolutely Fabulous.

Jay did some notable writing for Between The Lines when I served as its assistant editor, including book reviews, commentaries, and features.  I remember listening in while he interviewed Allen Ginsberg by phone.  The photograph that accompanied his interview with Leslie Feinberg, the two of them hugging, shows Jay beaming.

Perhaps most precious to me were the day-to-day intimacies that are best kept private.

Jay and my years together were sometimes rocky, with some of the most excruciating memories of my life.  There were reasons we broke up.  The thumbnail version is that we hurt each other through substance abuse and infidelity.

I never grasped the psychic pain he endured.

Part of queer remembering is queer forgetting.  As Milan Kundera might say: queer laughter and forgetting.

After Rick and I got together in 2000, Jay would come to visit.  I remember the three of us played putt-putt at a creepy abandoned course outside Ypsilanti.  I can’t forget taking Jay, climbing the back stairs and ducking through the window, to see dear Edward Weber as Ed was ailing.

Rick and I drove down to Columbus, as well, staying overnight at Jay’s mom’s house, which was a tad awkward.

When we moved to Lansing in 2006, Jay helped us paint our living room and dining room.

Jay didn’t have patience for Facebook, so didn’t stay long.  Given Facebook’s unfortunate status as a default for keeping connected, our contact dwindled.  But that’s making excuses.

We went down for Jay’s 40th birthday and met John, enjoying a long afternoon of conversation just the four of us after the big communal lunch.

Only after Jay was gone did I discover that he had a lively Twitter presence.

I never got to talk to him about my trip to New York for Stonewall 50 or about Rick and me visiting Whitman’s tomb or about the death of the amazing Tragically Hip crooner Gord Downie.

Last October, I was perched on a barstool at an old school gay dive in Pittsburgh called the Real Luck Café while Rick and our friends Pete and Daye were off buying Fiestaware.  One of the other stray customers played “How’s It Gonna Be?” by Third Eye Blind on the jukebox.  I sat trying to conceal the tears streaming down my face.  An apt moment for Jay’s death to hit me out of the blue.

In November, Jay’s friends held a gathering to celebrate his life at the Goodale Park Shelterhouse in Columbus.  It was a sunny Sunday afternoon and I strolled in a half trance along High Street, considerably built up and gentrified since I’d seen it.

Walking into the shelterhouse, I immediately found myself back in Jay’s world, recognizing photos from his childhood, burning incense, a framed print of Boy Krishna with his blue skin and radiant smile.  I was together once again with Chris and Dana and Alice and Ann and Landra and others, including Jay’s mom.  John seemed truly glad we came.  I am grateful we attended.

Before we left, Dana played a video of Jay in high school driving around ina giant ocean liner of a car talking non-stop, the marvel of his wit captured on tape.  I got to hear his voice one more time.

I continue wonder if it is my place to mourn for Jay, but I want to honor him, I want to remember.

Reflecting on the five years I got to share with Jay, someone I loved deeply, hints at the extent to which us LGBTQ folk are often careful in our queer remembering, or are careful in revealing what we queerly remember.  We need to remember, nonetheless, to willfully and unabashedly remember.